Essma Ben Hamida: Building a Movement for the Women of Tunisia 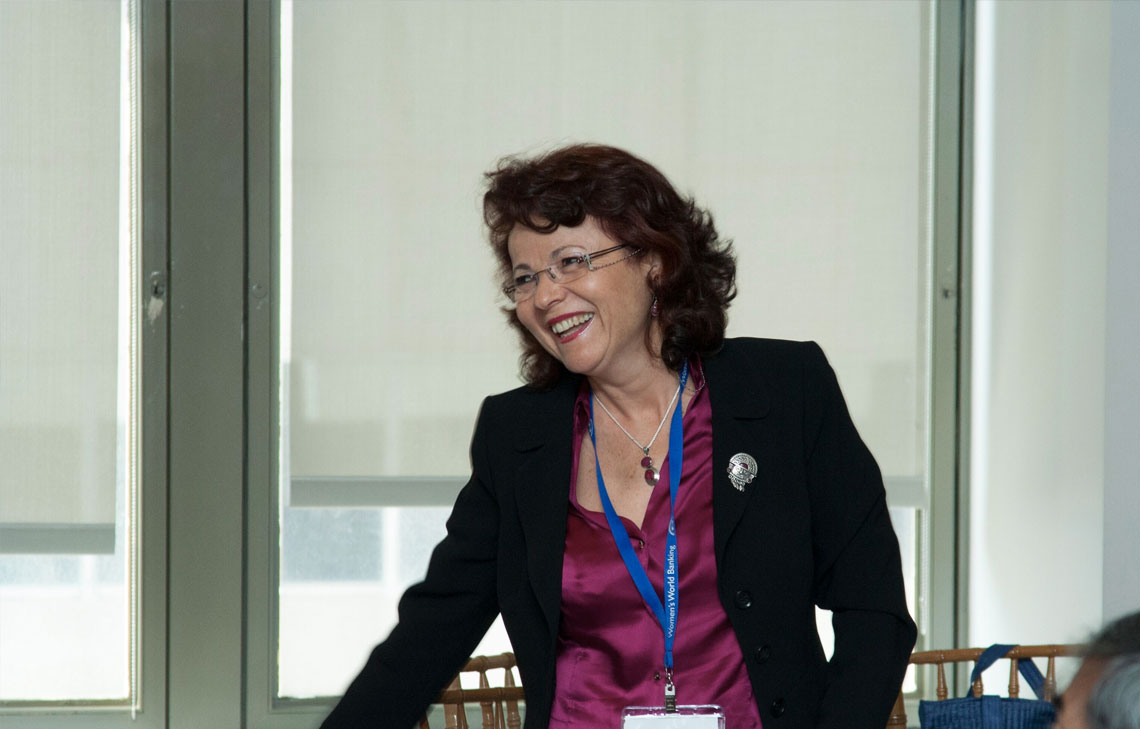 Essma Ben Hamida is the co-founder and CEO of enda inter-arabe in Tunisia. When she was a young girl, her dream was to be a singer like Egypt’s Umm Kulthum. But due to limitations imposed by traditions and culture, she was not able to follow that path. Instead, she studied history and geography and began her career as a secondary school teacher and a TV journalist in Tunisia. Over time, she became one of her country’s women leaders.

Essma opened the first bureau of the Tunisian Press Agency in New York at the United Nations. She was exposed to the troubles around the world while writing on political issues. Later, she moved to Rome to work for Inter Press Service, a global world press agency covering developing countries. She visited countries at war such as Palestine and Lebanon, where there was injustice and exploitation. She was shocked by the poverty she witnessed in Mauritania, Senegal, some Latin and Asian countries, some Arab countries, especially Palestine, where poverty was mixed with political occupation.

While she loved her work, she had the feeling that she was missing something. In 1988, Essma returned to Tunisia after several years of absence to write an article and was shocked by the poverty and inequalities in her own country. Women didn’t have access to credit and they were not decision makers. “After telling everyone how proud I am to be Tunisian with all the rights we have as women since the first year of Tunisia’s independence in 1956, I was shocked and speechless with the gender inequality I witnessed in my own country,” she says.

Essma had to admit that she could not support Tunisia’s development as a journalist and decided to take concrete action. At a conference in Geneva, she met Jacques Bugnicourt, the founder of enda tiers monde (“enda third world”), a Dakar-based international nongovernmental organization (NGO), and asked him if she could open an enda office in Tunisia. Essma wanted enda to be a bridge between Arab countries and Sub-Saharan Africa and Asia. “I discovered I can’t change the world, but let’s start with my country,” she says.

In 1989, Essma returned to Tunisia permanently with Michael Cracknell, her husband and partner, having no idea how they would launch enda without any money. Her goal was to emulate the Grameen Bank and Professor Muhammad Yunus. “We decided to launch into microcredit, but Michael and I had no experience in this,” Essma says. “Thanks to a grant from the Ford Foundation Cairo office, we went to Egypt to visit and learn from the Alexandria Businessmen’s Association and other NGOs offering microcredit.”

“We started with five loans that we financed from our own resources. It was wrong to do, that but we had no funds at the time,” she said. Essma and Michael started with a team of five and soon received $20,000 from a French NGO, Emaus International, to start disbursing the first loans in the largest poor neighborhood in Tunisia.

Until 2005 enda faced many financial challenges. “No one believed in us—not the funders, the government, even friends…except our women clients,” Essma recalls. “It was only when clients started to take repeat loans that government officials, funders, and friends started to believe in us. Then we received support from the Spanish government, the EU and some European NGOs like ICCO and Intermon.”

“Money empowers women and lets them contribute in decision-making. After 20 years I can see the changes. Everything changed completely for these entrepreneurial women.”

“The story of enda is like the story of a client who was very poor and grew little by little. It took us a few years to become bigger. We started with nothing but the business grew strongly and we became self-reliant. Microfinance helps to bring back your dignity, both for the clients and for the institution. If we had not reached self-sufficiency we could not have done nearly as much as we did.”

Microfinance is a powerful tool, Essma believes. “If you don’t give women access to finance, there can be no empowerment,” she says. “Now they are decision makers in their lives and the lives of their children. Some even help their husbands and unemployed children to start a business. When we started, Tunisian women were very busy within their homes. They could not go out. They used middle men to sell their products. They knew nothing about negotiating or about how much their products were actually selling for.”

“In 1992 before we began, no women were selling in the markets or streets. Cafés were only for men, never women. They worked almost as servants in their own homes. After we started providing loans, it was like an explosion. Women started their own businesses, learned to negotiate and sell. They were trained. They generated their own income,” recalls Essma. “Women in Tunisia are active; they want to work and own a business; they have Phoenician blood from Dido and the Queen of Carthage. Money empowers women and lets them contribute in decision-making. After 20 years I can see the changes. Everything changed completely for these entrepreneurial women.”

Initially, enda focused only on women. After Essma completed a gender training course in New York, though, she began conducting focus groups with clients and learned that women loved the idea of adding men clients, wanting their husbands and brothers to work and have their own business. With the help of Women’s World Banking, enda conducted research to help management understand the different needs of male and female clients. Now enda has 30 percent men clients. Enda also started only in urban areas, but with the help of the French Development Agency it expanded to serve women in rural areas in 2007.

During the Tunisian Revolution that began in December 2010, enda stayed open for all but two days. Clients understood the situation and even helped protect their branches. Essma and several senior staff visited branches and clients to understand their needs. Enda introduced loan rescheduling to ease repayment problems, refinanced a few clients who had lost all or part of their business, and even wrote off some debts. They opened new branches in the remotest and poorest areas to help more clients in need. Essma is proud that enda remained available and strengthened its relationship with clients during this time.

Since the revolution, enda’s portfolio has grown by 186 percent to 250 million TND (about US $140 million), reaching 250,000 clients through 79 branches; 35 percent of the clients are young people under 35, many of whom were among the 800,000 unemployed in the country. Thanks to a generous support from the Swiss Cooperation, enda launched a special product for startups run by young boys and girls from the poorest areas of the country.

Today, enda is working on new products, including microinsurance and mobile banking. “I am proud to see the reaction of women when they started using technology,” said Essma, reflecting on the improved future that technology can bring to clients and their businesses. Essma’s biggest dream and challenge is for enda to become the first microfinance bank in Tunisia to offer savings products, but they have a long way to go until the regulators allow this.

Essma has some advice for women leaders. “Maintain a balance between your private life and your work. Do what you are passionate about so you can give more. I am happy and passionate even if I work a lot. Take care of your health so you will be able to see the results of your hard work.”

Today, the result of Essma’s hard work is the empowerment of the poor in Tunisia. She is also fulfilling her old dream by taking singing classes.

Sandy Salama joined Women’s World Banking in 2013 as part of the Fellowship Program, which enables future global leaders in microfinance and women’s  economic empowerment to experience the challenges and rewards of creating financial opportunities for low-income women. Prior to joining Women’s World Banking, Sandy was the executive assistant and marketing & communications officer at Lead Foundation in Egypt, a Women’s World Banking network member institution.