Michaela Walsh: Going Back to the Roots with Women’s World Banking’s Founder 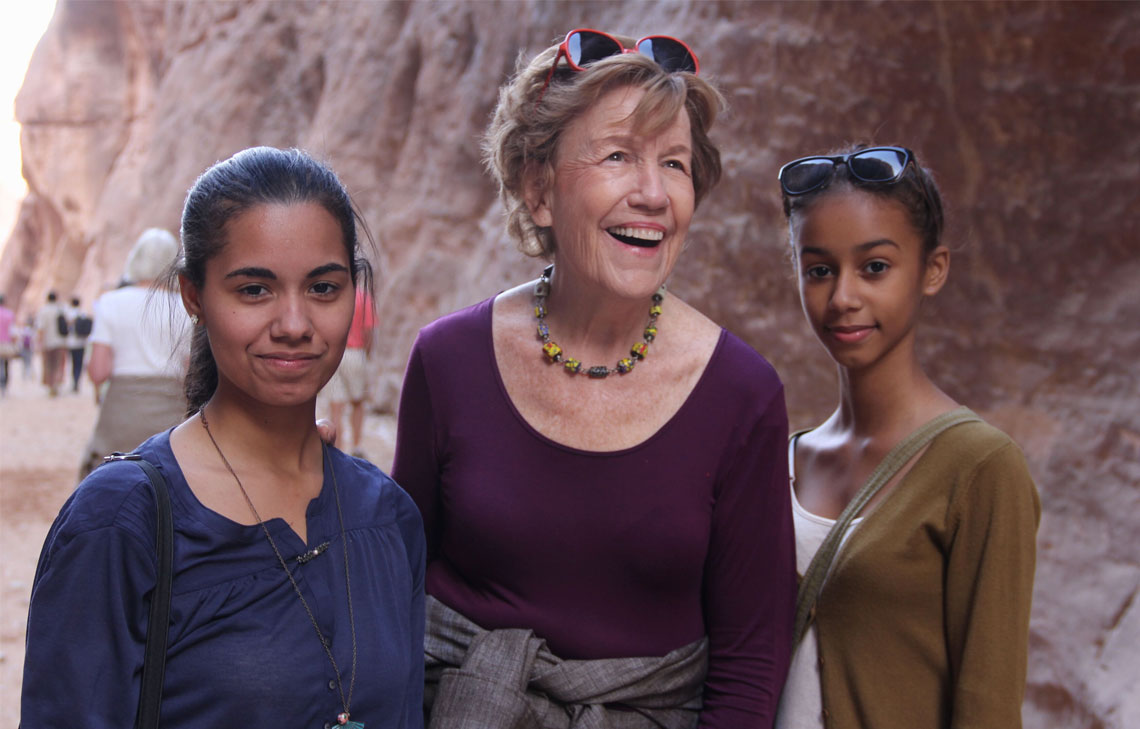 “From Kansas City to Mexico City,” the first chapter of Michaela Walsh’s book, Founding a Movement: Women’s World Banking 1975-1990, fittingly summarizes the progression of Michaela’s life from its beginnings to the event that launched a pioneering collaborative effort to drive women’s access to local financial services.Michaela did not set out to become a leader what is now known as the microfinance movement, but through passion and dedication she helped build and lead an organization that now reaches nearly 14 million women a year through a network of 38 institutions in 27 countries.

Born in Kansas City, Michaela made her way to New York in the late 1950s to work for Merrill Lynch. She was one of few women on Wall Street at the time, and she became the first woman to work for Merrill Lynch International in its Beirut and London offices. “I attended night school at the New York Institute of Finance and became a registered representative of the New York Stock Exchange,” Michaela says. “In 1960 when Merrill Lynch was planning to open an office in Beirut, staff encouraged me to join them. But the personnel office said no, sending women overseas was too high risk for Merril Lynch. I resigned from Merrill Lynch USA and paid my own way to Beirut! Finally they understood I was determined and was hired by Merrill Lynch International.”

In 1972, she joined the Rockefeller Brothers Fund in the civic and cultural values program. It was her first introduction to policy and social change and a launch pad for her to begin working to improve the economic status of women. Michaela’s experience at Rockefeller Brothers Fund led her to attend the United Nations First World Conference on Women in Mexico City in 1975 where the idea of Women’s World Banking was born. In Mexico City, Michaela joined like-minded women committed to helping women gain access to credit, so as to build ownership of their own production. They agreed to try to do this by building a global network of women owned financial institutions committed to serving local women. Russell Phillips, who was vice president of the Rockefeller Brothers Fund, said, “Michaela came back from Mexico City with this idea of creating some kind of finance mechanism that would focus on women, be organized by women, and run by women. I remember thinking it was a crazy idea.”

Thus, began the movement to give all women access to financial services by building a global network of women-owned and women-run independent and financial institutions committed to serving women. From 1975 to 1980, Michaela led this effort as chairperson of the Committee to Organize Women’s World Banking. She served as president of Women’s World Banking during the organization’s formative decade.

During her tenure as president, Michaela oversaw three international workshops focused on women’s banking and finance; she also built a global network of nearly 50 affiliates in over 40 countries, a global base capital of $10 million, and a total loan portfolio of over 56,000 loans, creating opportunity for women the world over. In her 1990 resignation letter, she said, “together we have created [Women’s World Banking] and we have laid the foundation for a movement to build business partnerships among women around the globe…[Women’s World Banking] is a real financial institution owned by women who are giving women credit!” She remains actively engaged in guiding the narrative of Women’s World Banking today as an honorary member for life on the organization’s Board of Trustees.

Following her tenure with Women’s World Banking, Michaela has remained committed to education and service. From 1998 and 2008, she was adjunct professor at Manhattanville College where she created a Global Student Leadership Program for undergraduate women from emerging economies. She has served on multiple boards and advisory committees including USAID, Synergos Institute, IPPF-WHR and the Union Theological Seminary. In 2006, she was appointed chairperson of the UN’s 59th Annual DPI/NGO (Department of Public Information/Nongovernmental Organization) Conference entitled “Unfinished Business: Effective Partnerships for Human Security and Sustainable Development.” She received the Woman of Vision Award of the National Organization for Women and the UN Development Programs’ Paul G. Hoffman Award for outstanding work in development. In 2012 she was honored by the Women’s Bond Club of New York for “changing the face of philanthropy”. Her honorarium funded a scholarship for two young women high school students from New York City to attend the 2013 Women’s World Banking global meeting in Amman, Jordan.

Looking back, Michaela is most proud of never compromising her sense of integrity. She is steadfast in the belief that she could not have accomplished all that she has done alone. Grateful for the people who supported Women’s World Banking in its infancy, she says she only “drove the bus”; guiding and leading but always with the support of others.

Michaela’s adventurous spirit resonates today with those she continues to inspire. When asked about the progress of gender equality and the younger generation taking the wheel, she says there are more options for women today, creating hope for the future. She’s committed to mentoring today’s youth to develop passion in their work, maintain integrity and diligence, and to always focus on what inspires them. Thrilled that women today have more motivation and energy than ever before, she remains convinced that women “can’t do it solo, we have to collaborate.” After all, collaboration is what built Women’s World Banking to the institution it is today. Reflecting on Women’s World Banking’s history she is quick to point out that no other global institution from 1975 still exists and network sharing is the key to longevity.

“I had a vision of women owning their own banking services and owning their own businesses…I drove the bus, but I couldn’t have created [Women’s World Banking] alone. It truly was a movement created by women, for women.”

Echo Blum joined Women’s World Banking in 2015 as the Executive Assistant to the President’s Office. She manages the President’s schedule, correspondence, and extensive domestic and international travel calendar. Echo also strategically partners with teams within and beyond Women’s World Banking to coordinate a wide variety of communications, and acts as a key liaison for the organization’s Executive Leadership Team.