Remembering Elaine Marie Ghosh: A Champion for the Poor with the Heart of a Mother 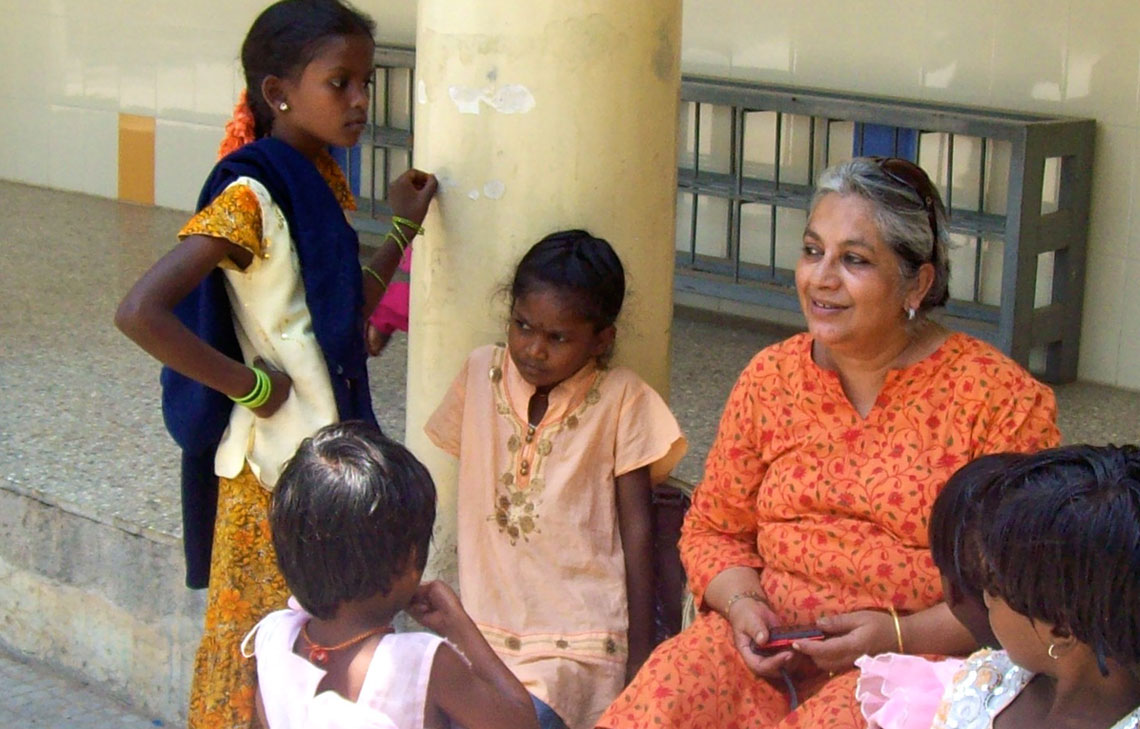 An Ujjivan customer is typically a working mother, running her household, managing her spouse, determined to send her children to the best school she can afford, providing her family with meals and doing her best as the primary caregiver of her home. Sound familiar? Elaine Ghosh would say, “The only difference between the women we work with and people like me is that they have less zeroes in their bank account!” Her mission was to make sure everyone had access to basic human rights—an equal ground to walk on—and she knew the best way to do that was to make sure they were financially included, not only through financial support but by providing them with assistance holistically through education, healthcare, livelihood development and social support.

In 1974, Elaine began her professional career as a banker in Citibank. She applied for a secretarial job but, after scoring very well in the math test, she was offered a financial analyst position. Her vivacious personality gave her the opportunity to represent Citi as their liaison officer with the Reserve Bank of India (RBI). After an eight year career as a banker, she found herself with three children and decided to become a full time mother. One should never underestimate the power and knowledge of a housebound mother. It was her job as a wife and mother that I believe eventually gave her the ability to connect so passionately with India’s excluded women.

Elaine founded Parinaam Foundation unofficially in 2006 to support the women clients of Ujjivan Financial Services, one of the world’s most respected microfinance institutions. Quite rightly she believed health care was the clients’ primary need. Instead of focusing on general health campaigns Elaine was determined to offer the Ujjivan families speciality services. Anyone can walk into a local public health clinic and get checked for a stomach ache. How many actually know that they should go to an ophthalmologist, or an ENT, or even the frightening dentist? She believed that until there was a good health insurance product in the market that treated the families fairly and met their needs, she was not going to compromise with something suboptimal. Healthcare for the excluded continues to be India’s biggest challenge.

In 2009, never one to take the easy route, Elaine created Parinamm’s Urban Ultra Poor Program, which focused on helping the poorest of the poor; the people we all know exist but very few of us are able to help. In India, they are migrant laborers, street cleaners, garbage collectors, unemployed mothers with infants, women whose husbands refuse to let them out of the house to work. She believed that one intervention would not make the change they required to turn their fortune and her unique approach was to tackle their issues holistically and help every person in the household.

The challenge with this approach is that every human is different and the team has to identify their unique problems and tackle them accordingly. Very few of the ultra poor have any form of identification; they have little knowledge of hospitals and medical care; they lack the confidence to get a full time job or demand basic labor rights, their hand to mouth way of life gives them little scope to understand how to save some money for a rainy day or just sign their name so they can eventually open a bank account and transact.

The Urban Ultra Poor Program also goes beyond the mother/wife and works with the husband who might be an alcoholic or abusive. Elaine joined hands with AA to build awareness and help men understand that there is much more to life and to look after his family and household. Finally, for children who are not going to school because their parents do not believe in education, Elaine created an interest in learning through tuition centers and then helped them to enroll in English medium schools. Her Academic Adoption Program now supports almost 300 children from Bangalore’s most destitute families, and the difference the program is making within the communities is astounding. Elaine always said the children will be the ones who will eventually move their families out of poverty and give them a home they can be proud of.

Her mission was to make sure everyone had access to basic human rights—an equal ground to walk on—and she knew the best way to do that was to make sure they were financially included, not only through financial support but by providing them with assistance holistically through education, healthcare, livelihood development and social support.

Elaine said, “If you could see the smile on a well-dressed woman’s face when she is able to go to an ATM machine or enter a microfinance company as a customer, you would understand the impact. She has never experienced such a day. She sits on a chair, is offered snacks and tea, receives her first microfinance loan directly into her bank account…this day she is empowered. She now looks forward, beyond her memories of a year ago when her children ran about half naked, her husband drank himself silly and beat her up at the slightest provocation, the days when she scrambled to put food in her children’s mouths or they died of the slightest illness because she had no money to pay for healthcare. I feel incredibly proud of the work our Urban Ultra Poor Program team has done to change these lives.” The Urban Ultra Poor Program was the Asia-Pacific winner of the 2013 Financial Times and Citi Ingenuity Awards, Urban Ideas in Action program. However, this is one of our most difficult programs to raise funds for because it attends to everything and most funders have a single focus.

Elaine’s final program is one of the most respected and well-run Financial Literacy Programs in India, Diksha. Her foresight on what was required for the sector was far ahead of any belief at that time. In 2010 the microfinance industry was in a crisis; the industry’s focus was on debt management and how to teach their customers to borrow wisely and within their capacity. Elaine, on the other hand, believed that women needed to be taught how to save and have a safe place to keep their money. She understood her battle lay with the banks and making them understand that they had could not resist this basic right. She would fiercely speak her mind at conferences and convert the most unwavering bankers into staunch supporters. Diksha has reached over 300,000 families and helped over 90,000 women open bank accounts.

Elaine was a fighter. She was an activist who refused to simply parade down a road to stand up for a cause. She believed that real impact would be accomplished by speaking to her beneficiaries, listening to what they need and then finding a way to help them; not by handing out freebies but by empowering and enabling them to achieve it themselves. She was always looking for ways in which she could push the boundaries; she knew there was so much more to do. A month before she passed I remember her telling me, “It’s time to think of something new, I want to create another program! I want to do something different.” Her outstanding contribution to financial inclusion was her unique approach of looking at her families with the eyes and heart of a Mother.

“Elaine would be the first to acknowledge that she had her flaws but the lack of clarity, was certainly not one of them. Her communication left no room for interpretation or consolation – she took no prisoners. Our conversations were always candid, sentences vivid and consequences, well that depended on which side of the table I sat. I am sure no one could predict that this petite, grey haired, seemingly benevolent lady would deliver a punch, hard enough to change the way the country looked at urban poverty.” – Maneesha Chadha, Director on Parinaam’s Board

“At a time of their lives when many start to dream of retirement, Elaine really came into her own by founding Parinaam. In a manner typical of her, she undertook this with zeal, passion, fierce integrity, backbreaking labour but most of all with deep compassion. She cared, she truly cared. And she was unafraid to go where few had dared: to the most destitute amongst India’s ocean of destitute. She grandly swatted away objections about outcomes; spend per head and such trivia to create the Urban Ultra Poor Program, now much adorned with global awards. And she did it in record time. I had known and been very fond of Elaine through her many roles- mother, wife, banker, expert antique restorer, gourmet chef and more. After Parinaam, that fondness acquired heft with the addition of profound respect.” – Ravi Bahl, Friend, former Citi colleague and avid supporter of Parinaam’s Urban Ultra Poor Program

“She wonderfully straddled the path of being a thought leader in the areas of financial inclusion and financial literacy in the Conference Halls and messianic zeal with which pursued the goal of financially including the poor households while working in the urban slums. She truly believed in the power of financial inclusion as a tool to empower the poor.” – Manas Mohanty, General Manager, College of Agricultural Banking Reserve Bank of India

Mallika Ghosh is Elaine’s daughter and first born. She gave up her job in advertising as head of films at McCann Erikson, South India, and joined Parinaam Foundation in 2010. She worked alongside her mother for four years. After Elaine passed away in November 2013, Mallika took over the management of the foundation.