Rosmarie Michel: An Entrepreneurial Spirit and Champion for Women 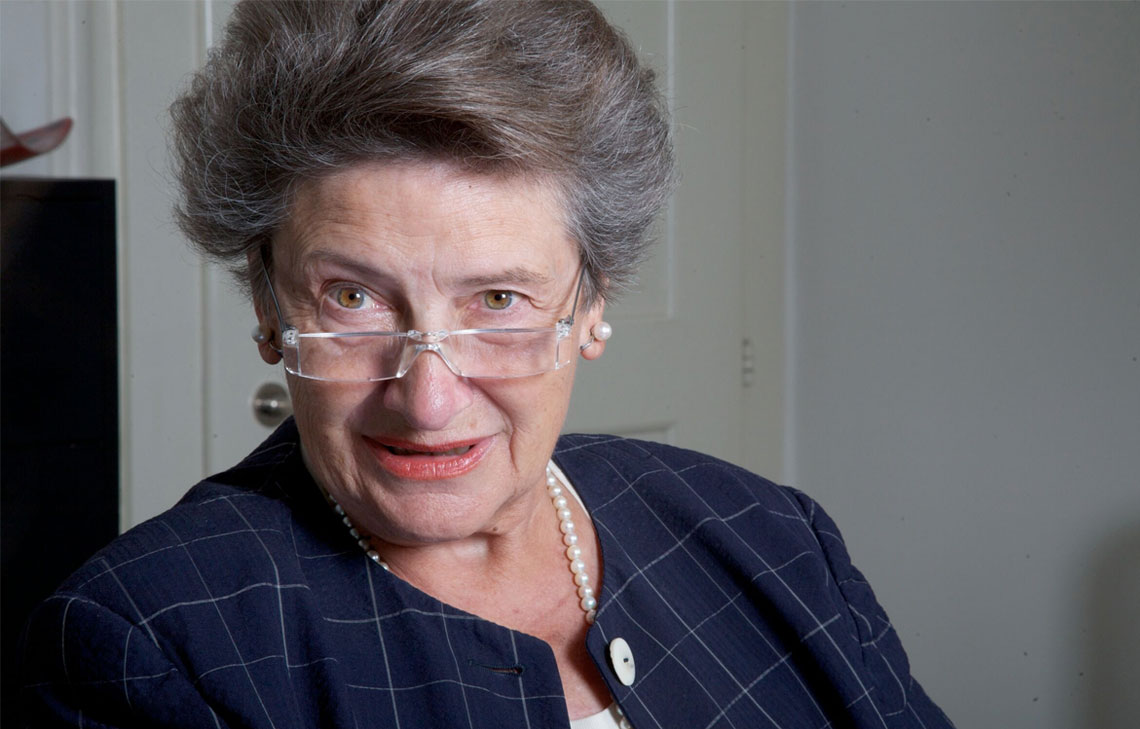 At the 1985 UN Conference on Women in Nairobi, Rosmarie Michel met a young woman who had traveled 200 miles across Kenya seeking advice. The young woman saw a need for shoes in her community and wanted to open a factory to fill that need. Though she had no business skills and scant financial tools, Rosmarie recognized her entrepreneurial mind, independence and determination. As a fourth-generation entrepreneur herself, Rosmarie knew that these were the most important qualities for success. The meeting helped ignite a lifelong mission to support women entrepreneurs all over the world.

“I learned quickly that poor women do not need charity, they need access. They are much more entrepreneurial than we are. We just have to provide them access to financial services and business know-how,” says Rosmarie.

At that Nairobi conference, Rosmarie was representing the International Federation of Business and Professional Women (IFBPW), which she served as president from 1983-1985. The IFBPW is a network of influential women leaders, entrepreneurs, business owners, executives, professionals and young career women. Nairobi was Rosmarie’s first exposure to the vast potential of women entrepreneurs in developing countries. She positioned herself in the main conference room to serve as a resource for women seeking advice and soon was approached by Michaela Walsh, founding president of Women’s World Banking. Michaela recognized a valuable combination in Rosmarie—entrepreneurial success and a passion for advocating internationally for women. Michaela invited her to a luncheon with the Women’s World Banking board.

“I looked at Women’s World Banking and admired how they were taking an old idea—small loans to entrepreneurs—and putting new spirit behind it for women,” says Rosmarie. “They shared my view that women all over the world have a responsibility to their families, their businesses, their communities and to society. They need access to the financial tools that will help them manage these responsibilities and build for the future.”

A few key mentors, and events like the Nairobi conference, shaped Rosmarie’s journey as a businesswoman and advocate for women’s financial access. Her first hero was her mother, who managed the family business (a café featuring chocolates and cookies from traditional Zurich recipes) alongside her duties as a mother. “She managed a business and our family in a way that we never felt neglected,” Rosmarie recalls. Rosmarie eventually took over the family business and built a career during a pivotal period for women in Switzerland.

“I learned quickly that poor women do not need charity, they need access. They are much more entrepreneurial than we are. We just have to provide them access to financial services and business know-how.”

In 1971, Switzerland finally granted women the right to vote. This had a ripple effect in the business community as male CEOs and businessmen looked to bring more women into management and board positions. In 1975, Rosmarie was appointed as the first woman to the board of a large European retailer. For the next 30 years, she held several other leadership positions, including serving on the board of Credit Suisse, a multinational financial services porvider.

Still, Rosmarie’s passion was always with smaller institutions that could offer financial tools and resources to low-income women, and she became a strong supporter of Women’s World Banking. She served as vice chair of the Executive Committee for over a decade and helped lead the organization through pivotal moments for the women’s financial inclusion movement. One of those moments was the 1995 Fourth UN Conference on Women in Beijing, when a commitment to women’s economic empowerment was a key feature in the conference’s concluding platform, due largely to the work of Women’s World Banking and then-president and CEO Nancy Barry.

Rosmarie served as Women’s World Banking’s vice chair under another of her heroines, Ela Bhatt. Ela, a pioneer of microfinance for women, founded the Self Employed Women’s Association (SEWA), a trade union for self-employed women, and the Cooperative Bank of SEWA.

“I think we were an ideal duo,” says Rosmarie, recalling her partnership with Ela. “She was the intellectual brain. I was the realistic brain. She taught me what it really meant to be a poor woman in the developing world.”

While attending a global meeting for Women’s World Banking in India, Rosmarie befriended a woman client who made her living as a paper picker on the city streets. She invited Rosmarie to her home to meet her family. Though their home was very modest, without water or electricity, Rosmarie remembers it fondly. “I have never felt so welcome as I did as a guest in this house. She was working to support her entire family, including her daughter, whom she was sending to school with the support of a microloan.”

Such experiences count among Rosmarie’s most memorable. “Women clients would tell me about their projects, their businesses. I understood what they were doing and why they were doing it. I could relate to their enthusiasm. Those are the women we need to support.” But she is quick to add that this support means access and knowledge. “I have always fought against the idea of charity. The clients of Women’s World Banking are a worthy investment. Microfinance brings financial access to women to help them build for the future for themselves and for the community.”

Reflecting on her career, Rosmarie appreciates the privilege she has enjoyed as an independent entrepreneur as she continues to counsel young women about the value of quality work and independent thinking, especially in the financial sector. She believes women leaders have a significant role to play in building a more inclusive financial system. “Women have a unique approach to humanity,” she says. “They are not after prestige. I wonder sometimes if the recent financial crises could have been avoided if more women were at the top of the banking system.”

As for her own role in advocating for women globally, Rosmarie, always the pragmatist, simply believes she was in the right places at the right time as opportunities came around. We’re all glad, and grateful, that she was.