Anne Hastings: Building a Bank for the Poor 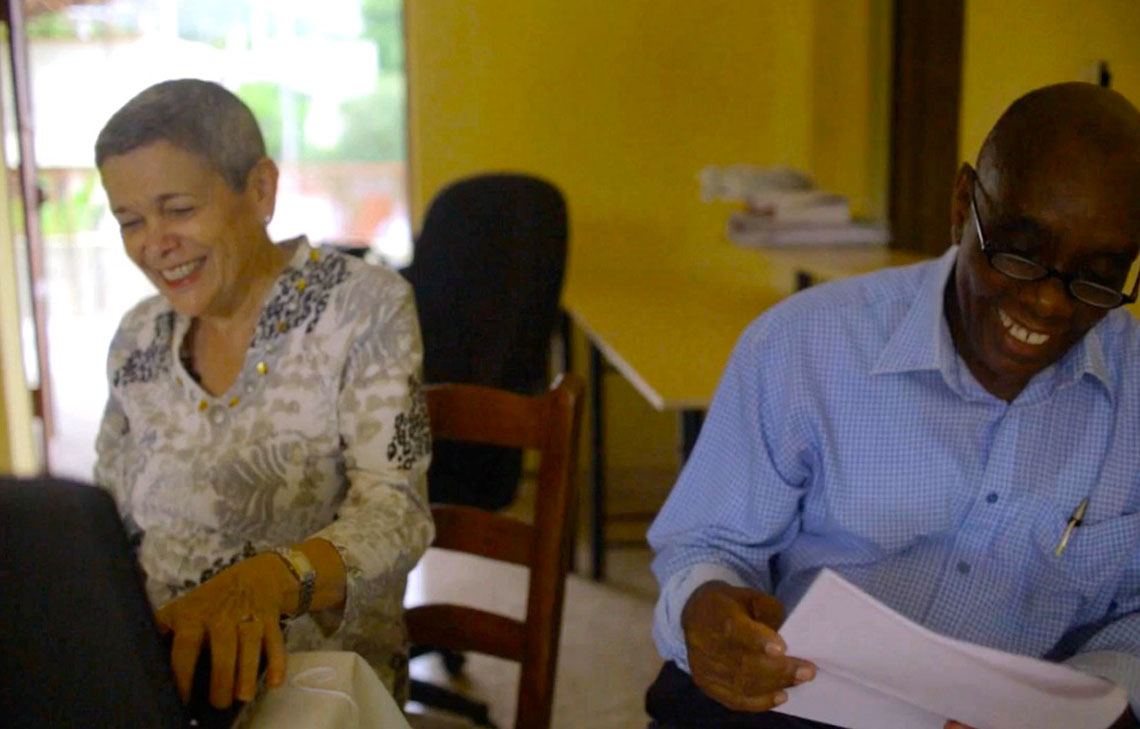 After 15 years working as a management consultant for senior federal government executives and directors of major nonprofits in Washington, DC, Anne Hastings was frustrated.

“I was feeling more and more like I wasn’t doing anything meaningful or making the world a better place,” Anne recalls.

Little did she know of the adventure that awaited her in a small Caribbean country where she would write her own chapter in the history of microfinance.

Having no previous experience in the developing world, Anne considered the Peace Corps, but a friend put her in touch with a priest in Haiti, Father Joseph Philippe.

Father Joseph had a vision to build a bank for the poor in Haiti. He needed someone to help execute that vision, and he had three criteria: 1) a commitment of three years; 2) fluent in English, French and Kreyòl; 3) and experience as director of a bank. Anne met none of these criteria. Nevertheless, she wrote a letter offering to help however she could for one year. She soon received a message on her answering machine. Father Joseph congratulated her on her courage and offered her the position as director of Fonkoze. They had never even had a conversation.

Anne first visited Haiti in December 1995 to meet Father Joseph. She quickly learned that he had a clearer vision of how Fonkoze could make a difference than any of her clients ever had in DC. She committed to returning in May 1996 to begin her journey in Haiti. While she was prepared to go without a salary for a year, Father Joseph also told her she would need to cover room and board.

“I said, are you kidding? I’m going to have to pay to come and work with you? He put his hand on my shoulder and said, ‘I think you’ll find a way.’ He knew he had me hook, line and sinker,” says Anne.

When Anne arrived in Haiti, Fonkoze was a small office with three volunteers open for a few hours a day with 32 open savings accounts and a few loans to women’s groups in the neighborhood. Anne’s first task was to learn Kreyòl, the primary language of all poor Haitians. Father Joseph set her up with two 15-year-old girls, who did not speak English, to work with her for three hours each day. Anne learned Kreyòl by accompanying the girls to the market each day, hailing tap taps (local transportation), and talking to people in the neighborhood. Her education in microfinance happened as quickly as her language lessons.

Each weekend, she would accompany Father Joseph on long drives to the outer reaches of Haiti to learn more about the needs in the remote communities. People would come from miles away to meet them. Father Joseph would explain that Anne was sent by the Holy Spirit to help them open a bank.

Anne laughs remembering the Father’s speeches. “I was overwhelmed. I just thought I had come because I was frustrated with the traffic in Washington, DC. And here I find out that the Holy Spirit had sent me!”

They met with peasant associations, women’s church groups, youth groups and prayer groups across Haiti focusing specifically on women, knowing they would be the gateway to financial inclusion in Haiti.

“Father Joseph explained to me that you can’t just give a woman a loan and send her on her way. You have to accompany her as she struggles to make her way out of poverty. It’s not just about a loan, he said, we have to give her a savings account, we have to help her to get money from her family living abroad home securely and safely, to provide training in literacy and business skills,” says Anne.

Delivering these services would require resources, and Anne hit the ground running. In 1996, she organized a conference in Miami to garner support for Fonkoze, inviting Haitian Diaspora from across the United States as well as specialists in microcredit and socially responsible investing who could share their expertise. The conference helped Anne secure critical early funding and sparked the establishment of Fonkoze USA, an investment fund to support the project. By the end of 1996, the fund grew to $100,000, which they used to begin lending.

“By the end of the first year, I had barely learned Kreyòl, but I could see that we were definitely making progress. I thought, how in the world would I ever leave Haiti?” says Anne. She decided to stay and continued to work as a volunteer for another six years before becoming a salaried employee.

Over the years, Anne and Father Joseph worked together to create a methodology that would work best for the women of Haiti. Around 2000, they started learning more about what was happening with microcredit around the world and connected with pioneering institution Grameen Bank in Bangladesh, which sent an advisor to help Fonkoze for six months. They refined their methodology to develop “solidarity groups” of five women, which were organized into six to 10 sets called centers.

As they worked each year to grow the number of clients and branches, Anne could really appreciate the difference they were making in women’s lives during Fonkoze’s annual general assemblies where representatives from the centers were elected to attend.

“Over 250 empowered women would come to these assemblies, and it was explosive. It was so exciting to see them and hear them talk about Fonkoze and what it had done for their lives,” says Anne.

Fonkoze’s model of holistic services continued to expand to include health programs, micro-insurance, and always a strong focus on training to help women develop both professionally and personally. The education program went beyond literacy to cover relevant topics such as sexual and reproductive health, business skills, and children’s rights due to the rampant child trafficking in Haiti. And when Fonkoze partnered with mobile operator Digicel to support SMS alerts and mobile wallets for members, Anne remembers introducing women to cell phones.

“I can’t tell you the number of times I was in the field watching women put a phone in her hand for the first time and talking to a family member in the United States. That was truly amazing,” recalls Anne.

By 2013, Fonkoze had grown to over 40 branches serving more than 45,000 clients. Seventeen years after first arriving in Haiti and planning to stay for one year, Anne decided it was time to move on to the next chapter in her work.

“The time came for me to turn the reins over to the next generation of leadership,” Anne said in a statement at the time. “Although I’m leaving Haiti physically, my heart remains with the women of Fonkoze…I look forward to applying my learnings and insights gained from my work with Fonkoze to help shape the evolution of the microfinance movement globally. Haiti and Fonkoze have much to teach the world.”

Little did she know of the adventure that awaited her in a small Caribbean country where she would write her own chapter in the history of microfinance.

And she did just that, pursuing her passion to promote the same tenets she helped establish at Fonkoze: transparency, accountability and social performance management for all financial institutions serving the poor. She became Executive Director of the Microfinance CEO Working Group, a collaborative effort to promote responsible microfinance as part of the broader effort for full financial inclusion globally. She also serves as a member of the Board of Directors of the Social Performance Task Force and on the Steering Committees of the Smart Campaign, TrueLift and SEEP’s Disaster Risk Reduction Program.

When Anne accepted Father Joseph’s offer, she expected a one-year project in Haiti where she could make a difference in people’s lives. Instead, she gained a lifelong passion for microfinance and poor women around the world gained a lifelong advocate for financial inclusion.